It’s all about imaginative placing

May be the act of designing is all about exploring and discovering the hidden potential. Perforated filler roofs fit perfectly into this theory. 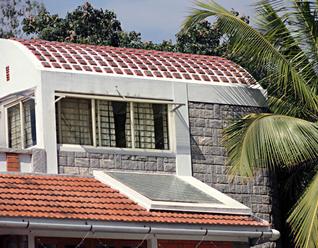 The design profession is strange. Often it does not take a project context as a mere fact, but loves to fantasise it. Designers play around the building form and attempt different combinations only to explore the options available, where some good options actually never get built!

Instead of using materials in their basic and simplest form, people try exploring the myriad ways of using them to get a variety of effects from the very same stuff. May be the act of designing is all about exploring and discovering the hidden potential.

Perforated roofs are a perfect fit to the above story line. As the sun moves across the sky, the sun’s rays move across the room, as if the roof acts like a cloak.

This idea started with architects placing coloured waste glass bottles within the roofs, randomly or in a design, creating a picturesque interior. Despite the attraction, issues such as water leakage, breaking of bottles, and shifting during concreting halted the popularity of this idea.

Jaali roofs on steel frames are an extended version and comparable beauty to watch, but appear weak in areas of high security threats.

Replacing steel frame by RCC and embedding the jaali blocks into the slab gives us the normal secure concrete roof, but with the playful small void, each acting like a small pinhole camera.

The half-cut hollow clay blocks are by far the easiest materials to embed in the roof, though other locally available options could also be employed. Reinforcement rods are placed as per structural design, which should be based on the block sizes. Upon the normal shuttering, hollow blocks are placed with holes up facing skywards with reinforcement rods in between to get the chosen design format.

Structurally, this system acts like a filler slab; hence the blocks adhere very well with concrete, avoiding water seepage possibilities. These blocks can be patterned on any geometry, as long as the steel rods are in position as desired. The normal concreting is preferred more than the ready mix, to ensure the holes are kept clean.

Placing a piece of glass on top ensures rain protection.

The perforated roofs also act like skylights, though with much lesser direct light.

In hot dry regions where light comes with high glare and sky brightness, it is climatically difficult to have large clear glass skylights, hence this design idea with small holes becomes a good fit that filters in soft light.

Incidentally, in hot regions such as Rajasthan, even the large window openings are replaced by jaalis of small voids!

The challenge is to increase the daylight factor, without increasing glare and sharp shadows. However, there would be increased indoor heat gain; hence roof bottom ventilation is a necessary provision.

The perforated RCC roof does not become lighter than the normal filler roofs, but visually appears lighter.

Besides the eco and aesthetic benefits, the major attraction for perforated roofs could be that it’s a do-able alternative idea, which demands no extra construction skills.

Jaali skylight can replace clear or translucent glass, thereby reducing the quantity of light and controlling the daylight factor.

Delightful: When sunlight filters in… 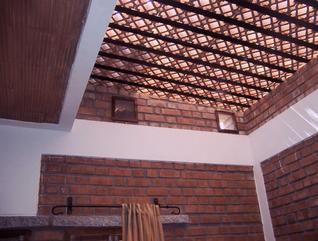 Have we ever walked under temporary roofs done with interwoven coconut tree leaves? In rural areas they are a common sight, especially during weddings, festivals, public congregations and such others.

Sun rays filtering through the voids of the leaves, moving across the hall as the sun moves in the sky, and creating a playful interior is a delightful experience to bask under. If designing can source inspiration from nature, such enclosures created with natural materials can also be an inspiration.

There are a variety of jaali blocks, bricks with hollow voids, available in the market. They are placed within mild steel framework, fabricated to the size required, with mortar packing in the joints from above. Depending upon the area to be covered, the structural design of M.S. frame may get cross beams and edge beams, but the top of all purlin-like horizontal members should be at the same level to take the blocks. The steel and block junction needs to be water-proofed, to stop water penetration there which may rust the members.

In case minimum light is desired, half of hollow clay block can be used, though it is not a light weight solution. The regular clay jaali blocks are only 2 to 3 inches thick, making their use the most ideal. Inverted T sections are the best, though angles and flats can also be used in various combinations. The top surface can be topped with glass, where the fabrication can be done to a gentle slope, to avoid rainwater falling inside.

Perforated roofs can give a miraculous touch to the internal skylights and courtyard roofs. While light gets in, it can happen so only through the voids, hence the interiors get a soft touch.

Especially where a single piece of glass is not desirable due to quantity of light, jaali skylight can replace clear or even translucent glass, thereby reducing the quantity of light and controlling the daylight factor.

In case the block size appears large and feels insecure, additional mild steel guard bar rods can be welded into the roof support, creating the window grill type of fabrication, to increase the sense of security.

The jaali roof has a great advantage in being a light weight solution. In case a rooftop enclosure is desired where weight restriction limits our options, jaali roof is a safe choice. If rain can be let in, the roof need not be topped with glass, making the overall roof still lighter.

Jaali roof is a slab for all practical purposes, but can let in all the three – air, light and rain! Hence, it is best suited for outdoor purposes, where there is no further upper floor. Being an assemblage of structural steel and blocks, it is not at all cumbersome like the RCC slab. The aesthetics, ease of assembly and maintenance together make the perforated jaali roof a choice for many occasions.

With 80 essays under this column, thoughts linger if writing about eco-friendly ideas has sent the wrong message that we need to discard conventional systems.

While discussing eco-friendly and green ideas, there is a trap. We may seek innovative ideas for a new house, not realising that the house we live in is already at its effective best.

The alternative ideas always get greater attention compared to the familiar, which is fair in a society where the routine and known are not reported, filmed, featured or published. However, what is not fair is the attempt to project the familiar and common methods of construction as villains of the green movement.

With 80 essays under ‘Green Sense,’ this thought lingered if writing about eco-friendly ideas has sent a wrong message that we need to discard conventional systems.

* The first comment wondered why the conventional practice, evolved over a century, gets criticised by innovative ideas that are not even a decade old.

* The second comment was, if these alternative ideas can so drastically reduce greenhouse gas emissions and create a sustainable future, why are they not becoming the mainstream approach.

* The last comment shared an experience that despite all the goodness of the eco-friendly ideas, the cheapest, fastest and easiest construction methods are present-day conventional approaches such as plastered brick walls, flat RCC roofs and painted walls.

Design ideas commonly followed today evolved as a preferred option at one time, hence have their own justification. Majority of them belong to mainstream construction practices, enjoying huge popularity and acceptance.

Incidentally, when introduced first, cement, steel, glass, paint, air conditioning and such others were touted as great discoveries, which of course they were, but today the same ideas get criticised as non-sustainable energy guzzlers.

As such, we need to realise that any kind of classification and de-meaning the other leads to nowhere. Every option available is a matter of fact, where the fact to be considered could be cost, culture, climate or construction feasibility.

The alternative ideas do not attempt to compete with the mainstream, hoping to dislodge them some day. Incidentally, most people find following the routine as the easiest and most comfortable, hence the conventional practice will always be the market leader.

In the final analysis, words such as mainstream, alternative, conventional, and sustainable do not mean much to people, who like to have a big basket of design ideas to pick from. At the given time of deciding, whatever appeals to them as the most user-friendly gets built. If people are more exposed to design implications and material effects, one may hope that their choices could be both user-friendly and eco-friendly. Green Sense aims at such a considered decision making.

Flat is fine on the roof

It was as if the century-long search for a perfect roof ended when flat RCC was discovered. 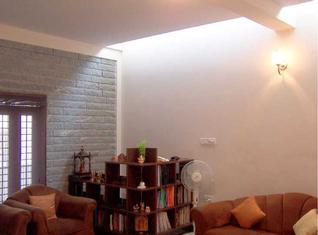 With both architecture and civil engineering stretching into newer frontiers, a dozen types of roof forms could be possible today, yet the flat RCC roof has won over India. From Shillong to Srinagar, Dwaraka to Rameshwaram, majority of roofs being cast are such concrete slabs. It is as if the century-long search for a perfect roof ended when flat RCC was discovered, which is partly true!

The traditional sloping roofs did not permit new additions, unless one removed it completely and then added upper floors. There was no option of terrace use anyway. Most houses of the past were not adequately fire proof, considering the easy combustibility of natural materials.

Geometrically controlled roofs such as sloping and curved ones could not cover any shape of a room, but dictated a proportion between length and width; or between roof height and wall heights. Sloping roofs needed to be well fixed to avoid their slippage which is among the common cause of failure. Against many such imperatives, flat roofs were always an attraction. It is not that there were no flat roofs in history, but that they were far less prevalent. They were traditionally done in low rainfall areas and hot dry climate, but their popularity was restricted to such vernacular practices only.

Being built with locally available materials, the room sizes were restricted, and mostly suffered from water seepage and caving of roofs after decades of existence. Gradually, as the advantages of flat roofs were discovered, people living in heavy rainfall areas also attempted flat roofs, Madras terrace being a good example.

In many ways, flat RCC roof has revolutionised Indian construction, hitherto dominated by regional variations and local practices. Structural issues such as deflection or the sagging of the slab could be arrested by designing the steel reinforcement accordingly. As such, much larger spaces are today covered than ever.

It is the flat roof that made rainwater collection possible and effective, even though people living in sloping roofed houses also had tried to collect rainwater through gutters, but with much less collection. Flat roofs lend themselves for a variety of utilitarian activities, so they double up as a small gathering space; roof garden; material dumping place; place to sleep at night or play area for children. Comparatively, they are far easier to cast, being just a horizontal surface, which could be placed on any irregular plan form.

From an ecological perspective, though heat gain is an associated problem, it could be reduced with many alternative methods such as mud phaska layer, brick bat coba, flat burnt brick tiles or roof mortar painted with white paint or lime coat. RCC roofs have high embodied energy and excessive use of RCC damages nature more than many other options. However, considering the ease of maintenance and affordable costs, they are the most popular roof form today.