The concept excites many but leaves the architects worrying and wondering how to achieve it. 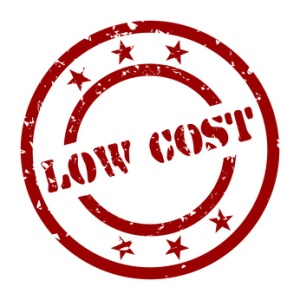 In the world of architectural buzz words, low-cost housing has a special place. Unlike many other academic or consultancy-based terms, low cost as a concept also excites social scientists, suggests cultural exclusion, and makes economists calculate the benefits. Of course politicians love it. It only leaves the architects worrying and wondering how to achieve it!

When social housing was being mooted by state housing boards and HUDCO, for the economically weaker sections, the idea of low-cost designs got prominence. Later, renowned architects such as Laurie Baker championed this cause, demonstrating how lowering the costs benefits even the moneyed people. As a result, efforts towards lowering construction costs became a major agenda across many institutions such as Central Building Research Institute (CBRI), and Nirmithi Kendras / Building Centres, besides scores of architects across the country.

The major thrust areas in achieving lower costs have revolved around building materials and construction technology. Parameters including project site, building plan, space configuration, mass production, skills of the team, self-help, project duration and such others were also looked at, but to a much lesser degree.

As such, many projects aimed at the lowest cost option, by simply reducing the quantity, quality and project expenditure, ignoring many other equally important factors. No wonder the low-cost approach came to get ridiculed and demeaned as a cheap option, which was partly true, but not entirely considering many merits of such an approach.

More than the costs getting lowered, the social image of low-cost houses got lowered, with certain class of people refusing such design ideas. Politicians started asking the architects how low can be low-cost houses, while sociologists concerned with the economically weaker sections felt that what we need in India is not merely low cost, but a no cost approach. Cumulatively, following innumerable comments and experiences, the term low- cost housing itself got questioned.

Over the years, the term ‘cost effective’ got introduced and continues to be a popular word. Actually, it never meant to be low in cost, but attempted to justify certain cost, even if it is high, by claiming value additions, longer life cycle, efficiency in approach and such others. Projects with both low and high budgets, as such, could come under the umbrella of cost-effective designs.

There is a close connection between eco-friendly architecture and cost-effective approach. The mainstream design approach does not seek either to lower the costs or to make it cost effective. That’s where the alternative ideas come into picture – to bring about an overall effectiveness to architecture.

Every home can be a resort

If resort architecture can create an ambience for good living, why cannot we adopt such ideas for every building? 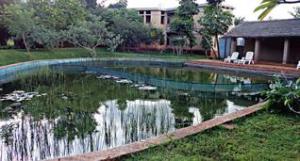 What do we think when we hear the word ‘resort’? Of course thoughts like fun, family, friends, relaxation and such others appear immediately. Soon we think of rustic looks, natural materials, day light, fresh air, earthy looks and this list may go on depending upon the exposure one has. Is it not strange that we do not care for these words or themes when we design our own city homes and offices, but expect them in a resort? If these design ideas are really so attractive, why are we not employing them outside resorts?

Good designs should soothe the mind and not provoke it, irrespective of whether the building is in a city or a village. From this psychological perspective, majority of visitors to resorts feel they are able to relax, feel good in a resort. This becomes possible, as people may reason, being away from work and being with nature, but actually it’s the design which also plays a major role in creating the mood.

If we look at the resort Our Native Village in Bangalore designed by architect Chitra Vishwanath, it not only has earthy architecture, but also a wide variety of eco-friendly concepts and energy-efficient ideas built into it. While having few isolated ideas also can make a project green, a large number of ideas can cumulatively add value to the project and can become a proven example towards sustainable future.

Our Native Village produces most its electricity, nearly 6.5 kva by way of solar photovoltaic cells, besides attempting energy from wind turbines. Using stabilised mud blocks and thatch-roof tops has ensured passive cooling, negating the need for air onditioners. The swimming pool has no chlorine treatments or other kinds of filtrations, but has a bio-pool where plants, roots and fish clean the circulating water.

Waste-water flows through a reed bed full of plants, getting partly purified in the process. All bio-degradable waste gets composted for the gardens. Needless to say, walls are un-plastered and roofs are non-conventional, with alternative ideas.

We need green buildings, being termed so not only by some calculations about how much AC electricity or fresh water supply it saves. Projects should have earthy qualities to create an ambience to soothe the mind, and additionally ensure attractive architecture, nutritious food, energy efficiency, water conservation and proper waste management. Without such holistic approach to building, it’s difficult to achieve critical benefits towards eco-friendly development.

If architecture can create an ambience for good living and if resort architecture creates it, why cannot we adopt such ideas for every building? The idea behind the question is not to explore the reasons, but to suggest the validity of nature-friendly ideas not only in a natural setting, but also in an urban context.

Striking looks, at no extra cost

Using a modern approach to traditional ideas, we can build green buildings which are attractive and require minimal maintenance. 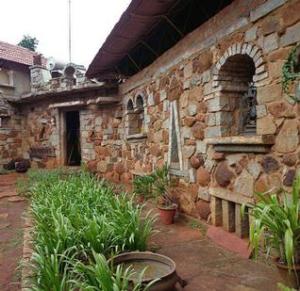 If we ask anyone to name few ecologically sensitive buildings, there are all chances of getting responses like village thatched hut, old police stations, local panchayat school and such others.

Possibly, the next response would be to discard them, saying “who wants to build them today.” This notion of the local ecological architecture being worthy of being dispensed with, is a product of ignorance about the worthiness of ecological ideas and equally well, a misgiving that they are not attractive.

The buildings named could be appearing ordinary, but the conceptual themes embedded in them could be so fundamental that we may be able to create iconic structures by learning from them. Institutions for dance like Nrityagram in Bengaluru designed by architect Gerard da Cunha explored this hidden potential of the local ecological approach to create buildings of lasting impact. Resorts, art galleries, centres for craft and such others also have been among the attractions for students and scholars alike to study the modern approach to traditional ideas.

Usually an architect may not classify his design under the ecological type; however, if it has specific elements related to energy efficiency and climatic conformity, there are all chances of it standing out among the crowd. Though the majority of us may not believe in making a building for the sake of elevation and outside attraction, everyone takes pride in a building that does appeal to people.

Majority of buildings designed with ecology in mind and natural materials in construction tend to be different from the routine normal structures, hence become an instantaneous hit.

They virtually stand out in the streetscape. While conventional buildings demand additional design inputs and monetary expenses to provide them with a good elevation, alternative architecture with ecological ideas need very little of them. Hence, such buildings save money on the one hand, and appear exotic as well.

The best source book towards an exotic yet local elevation is the region around the project site. Villages least influenced by the urban culture provide maximum ideas, they all being an innocent, un-pretentious society. Getting the right kind of skilled people to work on such ideas, especially in urban areas, is a challenge, but without the required experience and expertise, no good project gets built. It is hence important to give credits to the skilled team, to encourage them towards better workmanship.

The kind of local materials available, if used sensitively, do create an evocative elevation without much effort and also, cost. However, the inherent quality of such buildings appearing exotic should not be exploited only for the sake of getting exotic looks. Green buildings are not the ones that only look pretty – they should also have cultural roots, be cost effective, have lower life cycle costs and be manageable with minimal maintenance. The success of green buildings lies in achieving such an integrated whole.

In the space frame age 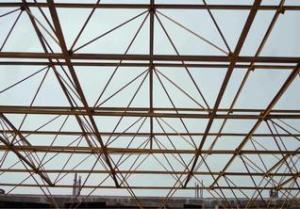 When we travel, have we observed some spaces in airports, industries or nowadays even in halls without any internal column? Have we seen the high ceiling with a cluster of structural steel members in a geometric fashion?

If we thought it’s a new idea, we are wrong. Right from the 1960s much research has gone into, especially by Buckminster Fuller, and others in the earlier era, developing a large span, light weight, low cost solution to create column-free space. Over the decades, this three-dimensional design has been accepted as an efficient alternative to our standard two-dimensional truss, now being found in petrol bunks, civic buildings and schools, reducing the net cost for the builders.

Simply stated, if we may equate a normal truss to alphabet A, the space frame is like a triangle, held rigidly at its three junctions. As we add on triangles made of steel members in all directions, horizontally, vertically and diagonally, a visually complex web gets formed. Actually, it simplifies the load transfer by picking up the load, instead of pushing it down and taking it across to the supports in multiple interlocked directions.

Normal causes of truss failure and avoiding which attributes to cost like tension and deflection become minimal here, being distributed across each small member. No member can fail unless the adjoining one fails, which is held by the next one, and so on. In the process, the design can be achieved with less steel and can cost less, especially for long spans.

Space frames are commonly built with steel though concrete, aluminium and timber have also been tried out. The nodes where the members converge, need a specially molded ball joint, for 8 or even up to 12 strut members need to be fixed at one point. The required design may specify single layered frame, multiple layers, curved profile or horizontal one. More the layers, more complex is the lattice of triangle, squares, hexagons or the geometry used, but they can span across wide spaces with heavy loads. Height of each layer, section of strut members and size of the grid vary as per the type of support, kind of loads and the frame system; hence demand expert design and supervision.

Experts like Anil Laul have experimented with space frames to reduce costs, e.g. replace ball joints by cup joints and such others. It’s good to see space frames today even in small towns like Srikakulam built by architect Bheemesh.

If they are efficient, why are they not found everywhere? Each member dimension has to be accurate; the properties of all materials have to be as specified and the structural behaviour has to be achieved as calculated. With no prior experience in handling space frames, people tend to initially hesitate to use this idea. However, once used, it can prove its potential.