It is mostly dumped along the roadside and in empty plots, though large-scale builders are attempting to manage the waste within the site itself. 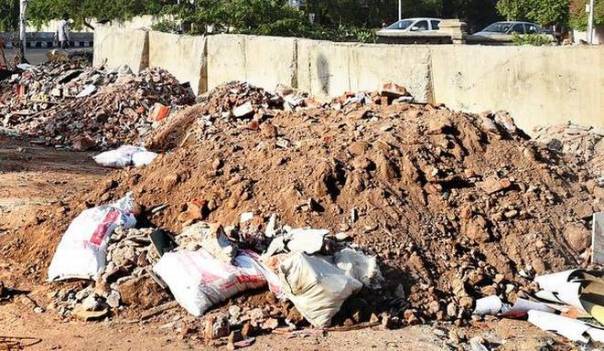 Every visitor loves to see the neat orderly looks of the house site on the day of grihapravesha , with only the house owner knowing the tension that gripped him or her a few days ago, with construction waste half covering the place. After a few thousands of rupees was spent and a few tractor loads of debris was sent out, the house is clean and shining.

Every construction site in the city, from homes to hospitals, sends out debris, commonly called as construction waste. Does anyone think about where is this ‘outside’ – the magical land where the debris gets hidden? Sadly, the outside is often in the city itself, too often along the road sides and empty plots, showcasing the dirtier part of construction.

Even green buildings are not an exception to this phenomenon, though waste generation is one of the criteria in scoring the green points. Many large-scale builders are aware of the problem and are attempting to manage the waste within the site itself.

The Bangalore city corporation estimates that a typical construction site would generate anywhere between 40 to 60 kg. of waste and has made regulations identifying few landfill sites, mostly in neighbouring erstwhile villages. Legally, proper debris clearance is binding on the owners and occupants. The Karnataka Pollution Control Board has formulated guidelines for waste segregation and management, for mandatory follow-up. All cities across India have enacted similar

legal documents, though smaller towns have no policy at all for waste management.

Yet the problem continues with C & D (Construction and Demolition) waste with increasing magnitude, as our cities are building at a rate never seen before. The landfills identified by the authorities are far and few, which increase the cost of carting away. So, the tractor drivers dump the debris on some vacant area at midnight, which is known but goes unabated. Though these debris clearance contractors are small-time players, today their contacts can be collected from web sites.

Reusing is the key

The first step to greener sense is definitely to minimise waste by salvaging and reusing. Much of bricks, stone, cement blocks, broken concrete, aggregates and earthy materials can be reused within the project itself. Many others like glass, plastics, steel, and wood, can be additives in manufacturing. Broken glazed and flooring tiles can be laid in mosaic pattern.

Electrical and plumbing items can be bought to exact needs. Most containers and packaging can be used by people as storage options. As such, very few materials may have to reach landfills. Of course, all this is easier said than done, because very few people wish to segregate waste and reach each item to its logical end.

Green sense lies not only in building sensibly, but also in building responsibly. We will have to ensure that debris is never dumped on the roadside.

Posted on September 9, 2017, in concepts, fundamentals and tagged eco, waste. Bookmark the permalink. Leave a comment.