← For a bright bathroom
Arch as a foundation →

When MES School of Architecture at Kuttipuram instituted an Award for Sustainable Living, its natural choice was Mohan Chevara, Rukmini and family. 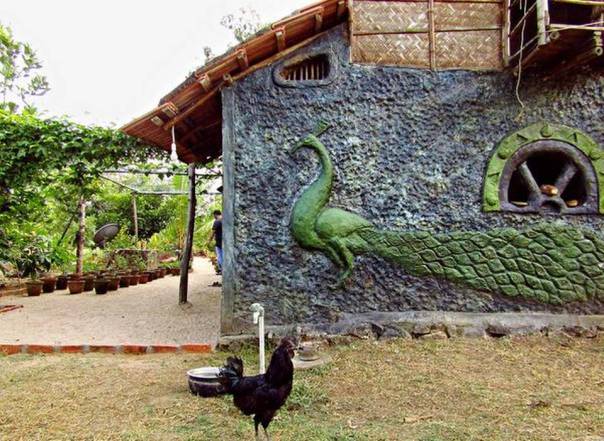 As this essay is being written and read this week, the media is full of news on the ever increasing climate crisis. A recently published IPCC (Inter-governmental Panel for Climate Change) report states that the world is warmer by 1.2 degree Celsius compared to the pre-industrial era. At this rate, we could be warmer by 1.5 degrees by 2030, much earlier than what was predicted in the last report.

The 24th CoP (Conference of Parties) is now being held at Poland with leaders from 197 nations converging at one place, hoping to converge on one decision – to resolve implementing the declarations of various past climate conventions. The former is sure, but the latter is doubtful.

This is not to connect the heads of state with climate change, but to remind all of us that we all are responsible for the crisis and the solution are within us. One such family that resolved to live with nature and practice eco-friendly living is the Chevara family near Palakkad.

When MES School of Architecture at Kuttipuram instituted an Award for Sustainable Living recently, the choice of its first recipient was Mohan Chevara, Rukmini and family.

The couple left their comfortable urban occupations in art and pharmacy education respectively and moved into a farming community which they started with a group of like-minded friends. Not believing in the commercialised school systems of today, they home-schooled their two daughters with many skill-sets, but no college degrees. Growing their own food with groundwater, their dependency on externalities was meager.

The family built a small 500 sq. ft. the house there all by themselves, except for electrician and roof carpenter, which naturally took time, but it came close to being with nature. Interwoven spliced bamboo applied over with mud mortar (wattle and daub) walls were adorned with has reliefs; frameless shutters made of split bamboo hung from top, covering the small windows with bamboo grills; bookshelves and ledges were made of bamboo; bamboo steps led to a compact mezzanine; cooking was in a tiny corner with firewood and gas as may be needed – it’s a lesson to learn from to check how less we need to live a basic life!

The house was raw, rustic but artistic. The rooms and spaces were tiny but were just about what we really need. A few material compromises and dependency on state electricity supply continues, for the project is still incomplete and health imperatives have made some demands on the final product.

Chevaras choose this lifestyle not out of compulsion of poverty, illiteracy or unemployment, but out of own choice to live with nature. They critique the modern urban living and wanted to take an alternative path to live sustainably.

Yet it was curious to note that they did not talk big and claimed to be saviors of ecology; it’s a simple way of life for them. We need more such people.

Posted on December 8, 2018, in designs, fundamentals. Bookmark the permalink. Leave a comment.

← For a bright bathroom
Arch as a foundation →